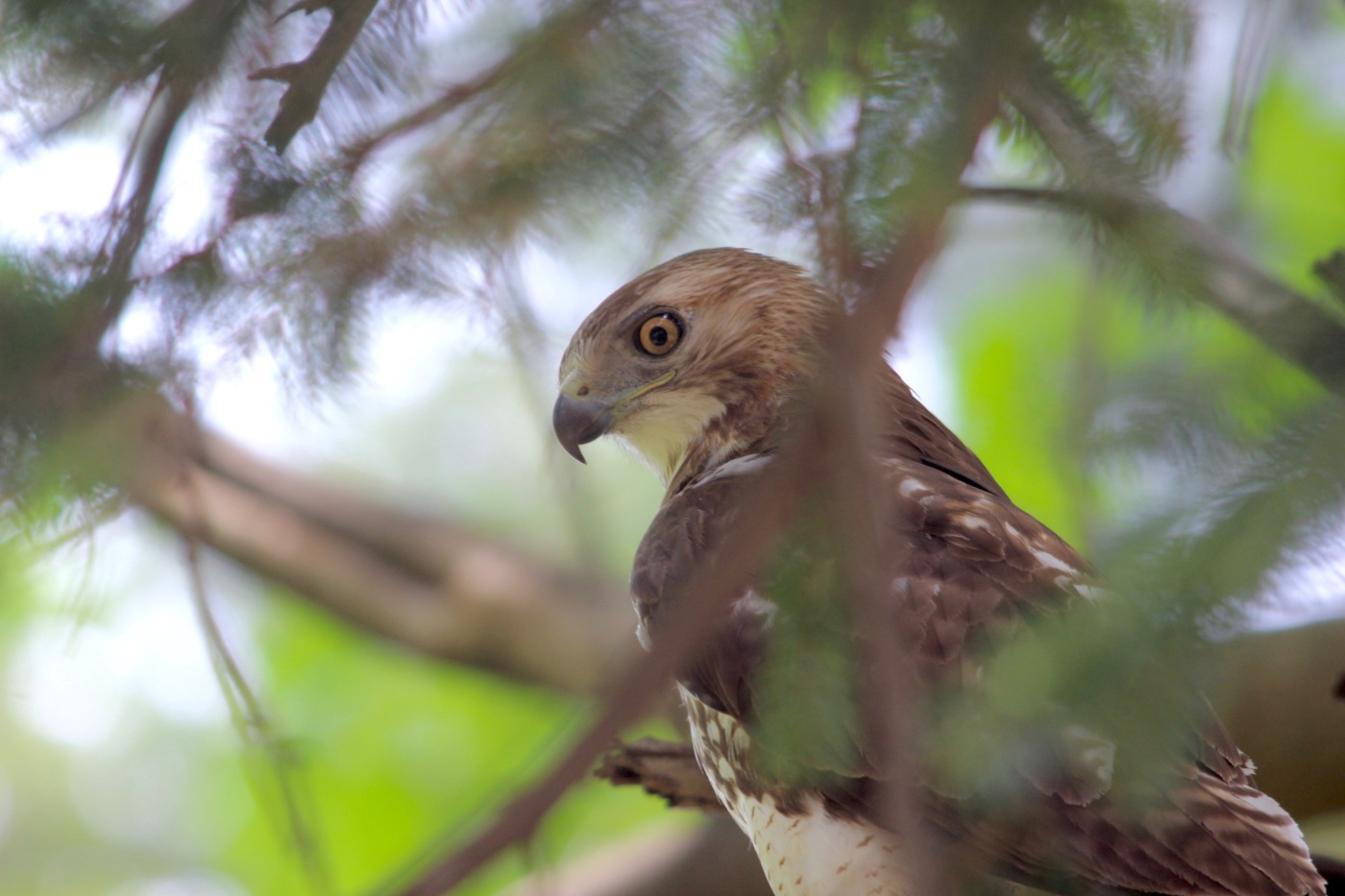 Hey guys, welcome back! Today, our first of many birds of prey on this blog! North America’s most abundant hawk (buzzard?), the Red-tailed Hawk! The Red-tail is found throughout the continental U.S. as well as much of Canada, Alaska, and even into Mexico, Central America and the Caribbean. They are most easily identifiable by their trademark red tail. If you don’t see a red tail, however, that doesn’t necessarily mean it’s not a Red-tailed Hawk. Red-tailed Hawks take about 2 years to molt into their adult plumage and get their red tails. Prior to that, they have a brown striped tail. In fact, some individuals never even get a red tail! Some other things to look for besides the tail is size; the Red-tail is a large hawk, with only a few raptors, such as eagles and Ferruginous Hawks being larger. Flight silhouette is another thing to get to know. A red-tail has large, broad wings, and a relatively short tail (especially compared to smaller hawks and falcons.)

Red-tailed Hawks are part of the genus buteo. I know, I know… taxonomy. Here in North America, we use the name “hawk” for most raptors that aren’t owls, eagles, vultures, or falcons. In pretty much the rest of the world, like Eurasia, raptors in the genus buteo are not called hawks, only birds in the genus accipiter are. Buteo birds like the Red-tail Hawk, are known as buzzards in Eurasia. Red-tailed Hawks are highly adaptable, and are growing more and more common in large cities. Take New York City for example. In (and around) Central Park alone, there were 4 pairs of breeding Red-tailed Hawks that I knew of specifically (there may have been even more than that!) Central Park is only 2.5 miles by .5 mile in area. That’s really not all that big of an area. In most places, an area of that size would only have one pair of hawks, but the abundance of food in Central Park enables the raptors to tolerate more birds nearby, and not get outcompeted for food. City-dwelling Red-tails have also adapted to include pigeons in their diet. And if you’ve ever been to NYC, you know there’s no shortage of pigeons!

Working in Central Park, and walking around 5 days a week, I saw a number of hawks. I saw one swoop down and grab a rat not 20 feet in front of me! And I often saw one actually enjoying their meal. The most memorable was while leading a bird walk in Central Park’s Ravine, we came upon a Red-tail at eye level 15 feet off the path on the remnants of a dead tree eating a squirrel. We all stood and watched for a while. Graphic, for sure, but it was fascinating and really cool. Pulling the intestines like you or I might eat spaghetti. Hawks, like owls, will eat everything but the fur and regurgitate the bones and other indigestible parts in a pellet. The fur and skin often remain relatively intact and they will actually use it to line the nest during nesting season. Nothing like a squirrel skin rug to fancy up your home!

Juvenile Red-tailed Hawks can be quite entertaining to watch. They’re still learning how to be birds, and how to hunt, and their curiosity can make for some interesting sights. You’ll often seen them swooping down on ducks! A Red-tailed Hawk is not built to catch a duck. A Peregrine Falcon, or Great Horned Owl, sure, but seeing a juvenile Red-tail try can be quite amusing. I also saw one going in on an osage orange fruit. For anyone unfamiliar, an osage orange looks kind of like a softball-sized green brain. Not typical Red-Tail food. I saw one (the one at the top of this post as a matter of fact) at Brooklyn’s Greenwood Cemetery trying to go after a groundhog. They had a stare down for a couple minutes until the groundhog had enough, lunged toward the hawk, and chased it off haha! One of my more amusing juvenile Red-tail stories was a couple months back when I came upon one in Forest Park, here in St. Louis, that was trying to figure out what to do with a turtle! He stood on it, tried to throw it in the air, played with it for about 10 minutes before realizing he wasn’t going to get anywhere and flew off. About 2 minutes later the turtle went on with his business and began walking back down to the water haha!

Raptors have always been cool to me. I’ve seen tons of Red-tailed Hawks, but every time I see one to this day, it’s a stop in my tracks and just watch it moment. They’re just that cool. Speaking of cool birds, specifically ones that maybe don’t get the love a raptor does, next time we have one of the smartest animals on the planet. The American Crow.