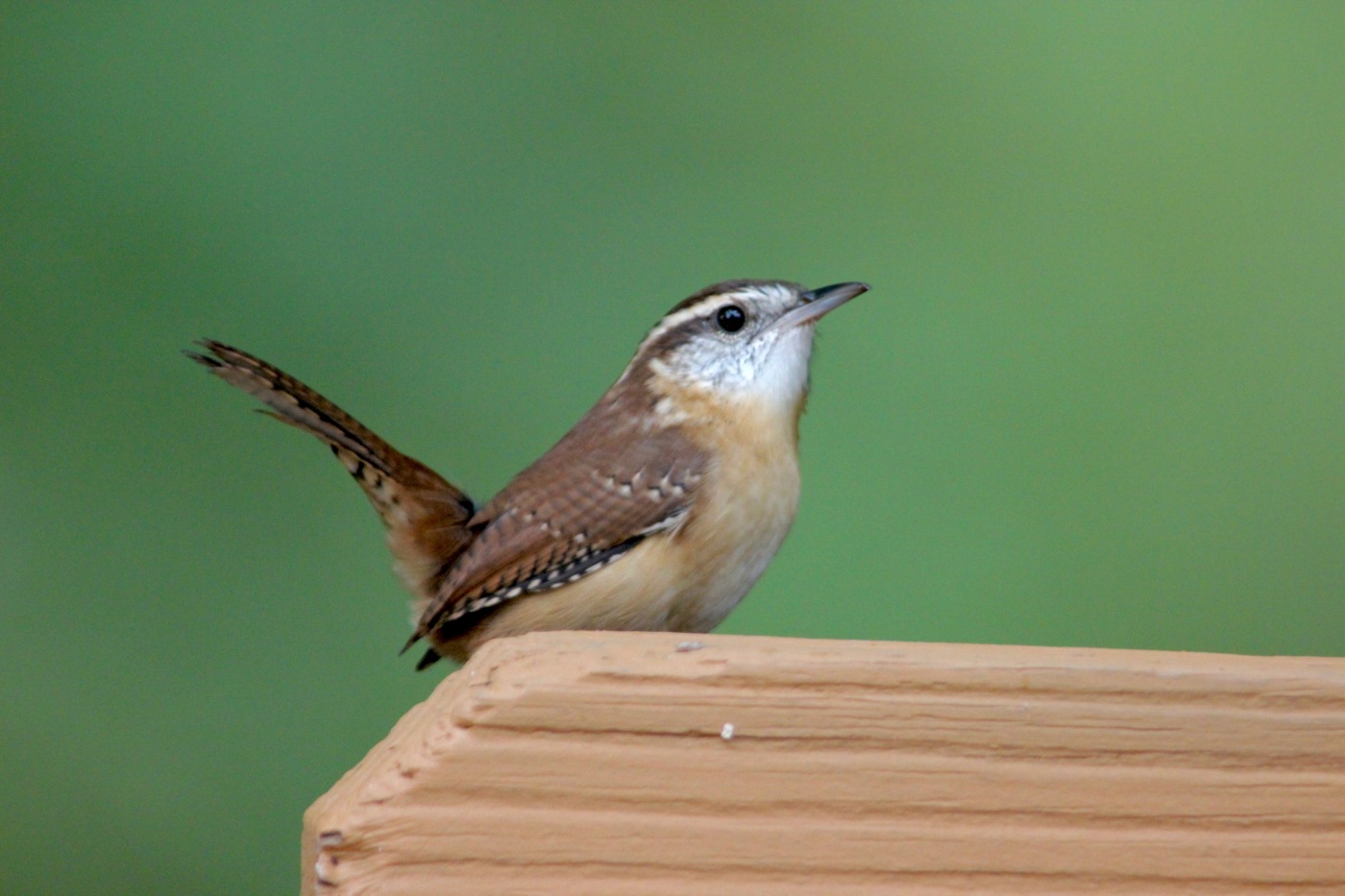 Like a lot of wrens, the Carolina Wren loves thick, tangled brush where it can hide and search for bugs and worms. If you have brush piles in your backyard, and a good variety of food, you might have wrens in your backyard. My mom has a wooded area along the side and back of her backyard, and every tree and bush that gets trimmed, those trimmed branches are thrown into a brush pile. She has a bunch of wrens in her yard, including the one pictured at the very top of this post!

Remember when I described the Carolina Wren as loud? It has a very loud song – louder than you’d think a bird of that size could produce. I remember one of the first Carolina Wrens I saw. It was a few years ago in Central Park. I kept hearing this loud melodic song. It was different than anything else I was hearing. After a good ten minutes, I tracked it down. It was a Carolina Wren! Why are they so loud? Well, because they are, I suppose. I don’t have a definitive answer for you guys. My guess would be that it’s, in part at least, because they are very territorial, and don’t just sing to attract a mate, but to also defend their territory. This is probably why if you hear one birding, and happen to play it’s song, it’ll often come right near you, looking to “out sing” the trespassing bird. I have done this a couple times, and always kinda felt bad after the fact. I’m not one of those birders that tries to attract birds by playing recorded songs. Although I tried it a couple times, like with a Carolina Wren, I don’t want to get in that habit. We could debate the whys and why-nots of playback during birding, but we’d be here all day. In general, I fall on the side of not doing it, if for no other reason than I feel like it’s cheating, and I want to find the bird using my senses, not a recording. But, to each his own.

Carolina Wrens were never all that common in New York, at least not in Central Park, in my experience. I did see a number of them at Ft. Tryon park in the Rockaways in Queens though. They are much more plentiful here in St. Louis; I’ve seen more since moving here than I have my entire birding career beforehand. And I’ve only been here for about 6 months! Carolina Wrens are sedentary, meaning they are year round residents in their range, which is most of the Eastern U.S. They will visit feeders on occasion, especially if you have a mealworm feeder or some suet. They also like to eat certain kinds of berries. While I worked in Central Park conducting nature walks for families, I always had to make sure I pointed out the poison ivy. You don’t want some exploratory 8 year old kid getting poison ivy! I’d get people all the time that asked why we had so much in the park. The answer was that it’s a native plant, and provides shelter and food for some species of animals. Not many people realize this, but poison ivy produces berries, and they’re some of the Carolina Wren’s favorites! (Parks may or may not also keep poison ivy as a natural deterrent to keep people from trampling all over the woods.) Fun fact: not everyone is allergic to poison ivy! And others, like myself, only get it in certain spots (for me, my arms will get it bad, but I won’t get it on my legs at all!)

That’ll about wrap things up for this post. Come back next time for a popular, and common, backyard bird that brings a bright splash of color with it; the American Goldfinch.