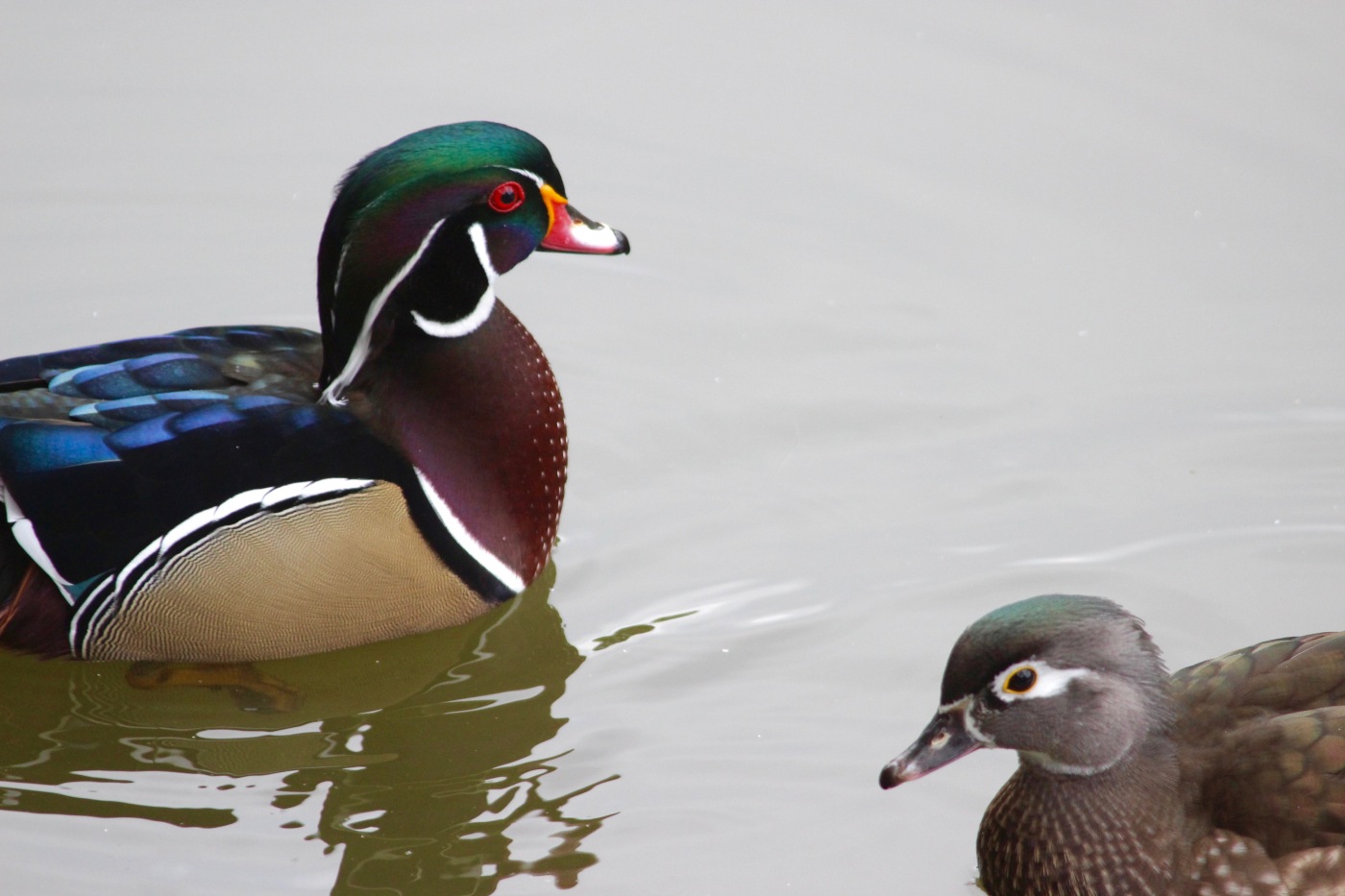 Hey guys, welcome back! The Wood Duck is arguably the most beautiful waterfowl species in the world. Wood Ducks are fairly widespread in North America, being year-round residents in much of the eastern U.S. (with their abundance being more spotty in the west.) They are named because they actually nest in tree hollows (or very often man-made nest boxes.) They have talons on their webbed feet that enable them to perch in trees, and are quite comfortable flying through the woods unlike most waterfowl. Additionally, they are one of the few duck species to consistently produce two broods of young a year. Wood Ducks are smaller than Mallards, and the male has a beautiful, crested, iridescent green head with bright white stripes, a chestnut breast, and beautiful iridescent blue feathers of his wings. The female is a greyish-brown with white spots, a white patch around the eye, and usually shows some faint iridescence on her head and wings.

Growing up, I often went fishing with my dad. One of the places we used to go was the fishing ponds at the Holden Arboretum. I would see what looked kind of like bird houses along the ponds, particularly in the cattails. My dad told me they were for Wood Ducks. I had seen pictures of one and thought they were really cool looking, but never saw one in person. I just figured they must be rare. It wasn’t until I moved to New York City, of all places, that I saw one in person for the first time. There would often be a few in Central Park. My friend, and former co-worker there, Julie, named many of them. They’re her favorite duck, and probably her favorite bird overall. There was Nathaniel who lived on the Harlem Meer, a large lake at the north end of the park, Chester who lived in the Pool, a small pond in the northern part of the park, and then there was Woodrow. Woodrow was her favorite. He still lives at the Pond, just in from 59th St at the southern end of the Park. Shout out to Woodrow!

After moving to St. Louis, I went birding in Forest Park and saw more Wood Ducks than I had ever seen at one time before. In Central Park, you’d see two or three. Here in St. Louis, it’s not uncommon to see five or more. And if you visit the St. Louis Zoo, you can see upwards of thirty Wood Ducks, none of them part of the Zoo’s collection! St. Louis was also the first time I had ever seen a Wood Duck duckling!

Remember my saying how unlike most ducks these guys perch and live in trees? Well, that’s not the only thing they do different from what most people picture a duck doing. What’s the number one thing most people think of when they think of a duck? They quack. Well, Wood Ducks don’t quack, they sort of whistle. The male’s call is a sort of high pitched “zipper” sound. It’s actually pretty cute.

So, despite my younger self assuming the Wood Duck was rare, they are actually fairly common within their range. A striking little duck that perches in trees and whistles! That’ll do it for today. I looked at my life list and it appears water birds is the theme this month. Last time we had the Canada Goose, today it’s the Wood Duck, and coming up we have two more ducks and a coot! So check back next time when we profile the Gadwall!

One thought on “Wood Duck”