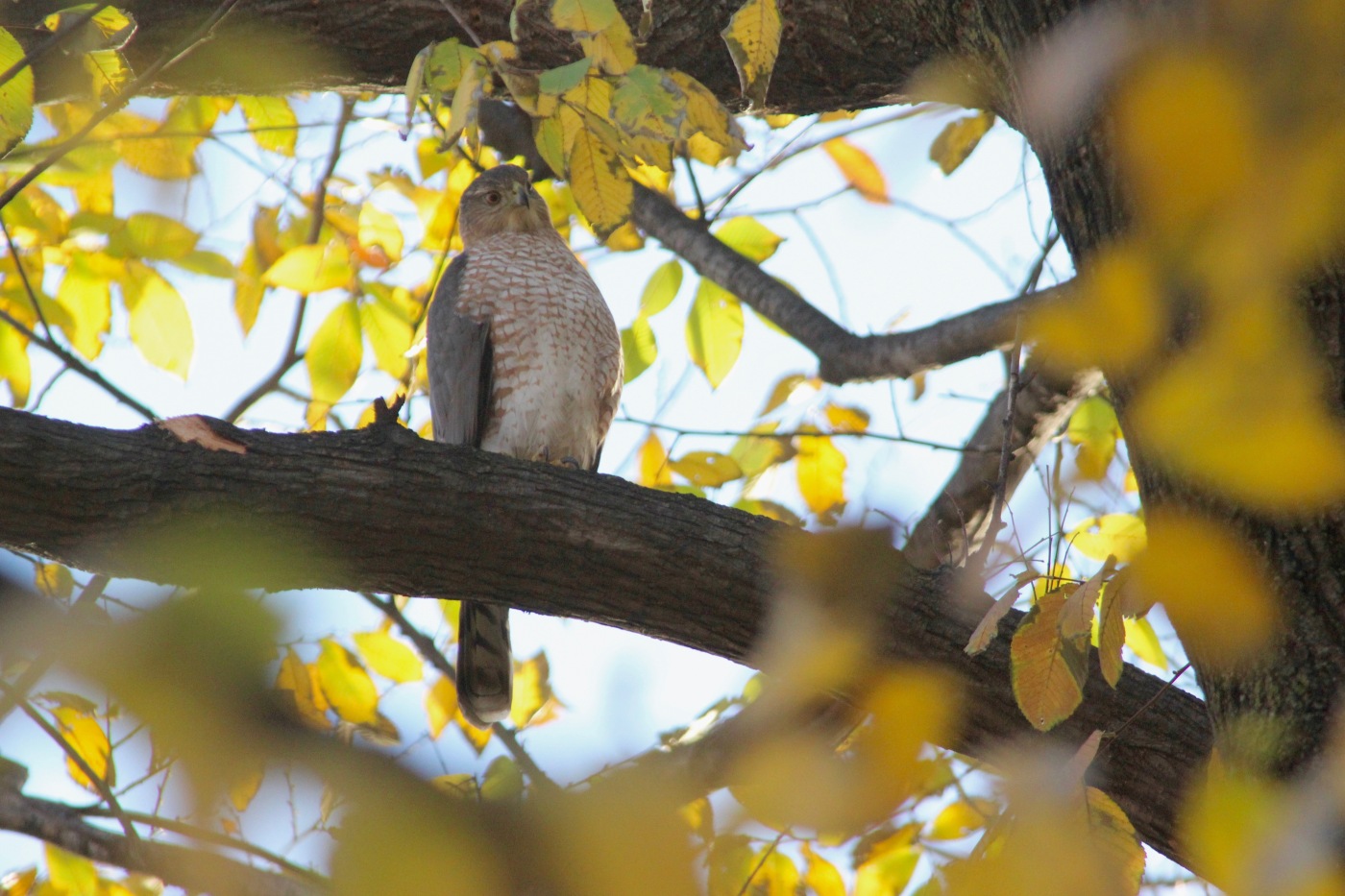 Hey guys, welcome back! The Cooper’s Hawk. One of my favorite birds of prey. No, I don’t know who Cooper was, probably some ornithologist or something. Anyway, the Cooper’s Hawk is part of the accipiter genus, which if you remember from the Red-tailed Hawk post, are also known as the true hawks. One of the most widespread accipiters in North America, the Cooper’s Hawk can be found in every state of the continental U.S. (nearly all of them year-round.) They’re medium sized raptors built for maneuverability.

I’ll talk briefly about ID in a minute (it can be quite difficult.) First, a couple of my favorite Cooper’s Hawk sightings. One I actually talked about before. One time when I worked in Central Park, I heard a big commotion. A lot of crows were screaming, I looked across the North Meadow and saw them chasing around some other birds. I made my way over to them, and saw that there were at least a dozen crows all harassing a couple of Cooper’s Hawks. The Cooper’s Hawks weren’t taking it lying down, mind you, they were certainly fighting back. Of course, being outnumbered 15 to 2 by some of the smartest birds in the world, the Cooper’s Hawks never really stood a chance, but they didn’t care. They didn’t waver or back down. I ended up following them and watching for about 30 minutes. They were doing this dance all around me. I actually took video with my phone, but it doesn’t quite do it justice. The tenacity of the hawks was exactly what you’d expect from a fearful raptor!

Then there was another time I saw one on Randall’s Island. It was sitting on the ground and there was all this white stuff around it. It was January, and it looked like it was sitting in a patch of snow. I looked through my binoculars and saw it wasn’t snow at all but the remains of a white pigeon! I know some birders get upset when they see a raptor take down another bird, especially if it’s a more beloved bird like a goldfinch, but for me, that’s just nature. The hawk has to eat. I find it fascinating, if not a little gruesome, to watch. Witnessing an apex predator doing what it’s built to do and doing it so efficiently. It’s not unlike going on safari and seeing a leopard kill an antelope and drag it up a tree to eat.

In terms of ID, an adult Cooper’s Hawk has a slate gray back and wings, with a white and orange striped breast, and a very long, striped tail. The problem? This. Yep, those are two different birds. The Sharp-shinned Hawk looks very similar, almost identical. On average, the Cooper’s Hawk is larger. But, as with most raptors, females are larger, which means the size range within species is greater than a lot of other birds. So, a large female Sharp-shinned is about the same size as a small male Cooper’s. There’s some other ways to tell the two apart. The Cooper’s has a larger head, relative to its body, a more rounded tail, and a slightly different flight silhouette. In fact, even experienced birders often can’t tell the two apart. On eBird, there’s even a spot on the checklist for “Sharp-shinned/Copper’s Hawk” so you can report that you saw a bird that was one of the two.

If you want to attract a Cooper’s Hawk, put up some bird feeders. Cooper’s Hawks are equipped to fly through heavily forested areas, their long tail acting as a rudder to maneuver through tight quarters, and feed almost exclusively on birds (as opposed to mammals that larger raptors, like the Red-tailed Hawk prefers.) They can be considered by some, well maybe not pests, but not welcome in a lot of people’s backyards. But hey, if I had easy access to a free all-you-can-eat buffet, I’d frequent it too! Join me next time for a tiny, hard to spot woodland bird; the Brown Creeper!

One thought on “Cooper’s Hawk”