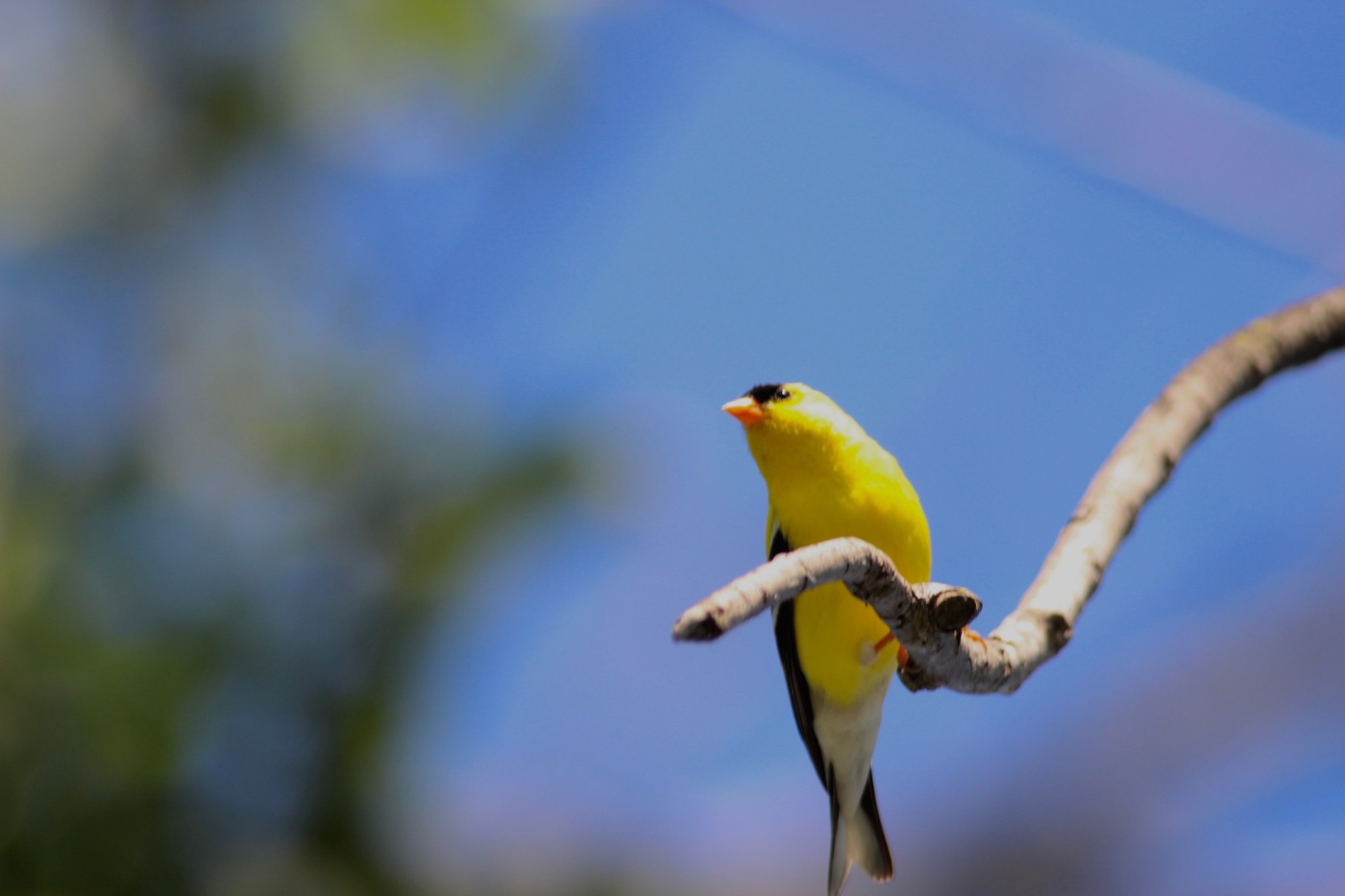 Hey guys, welcome back! Today, a bright yellow little bird common to backyard feeders, the American Goldfinch! I remember seeing these yellow little birds as a kid every so often. I didn’t know what they were, and the only yellow bird I knew of was the Canary, so I just assumed that’s what these guys were. It’s kind of funny how the Canary has become synonymous with “small yellow bird” despite the fact that not all canaries are yellow. Wild Canaries are only found in southern Africa, and Macaronesia (the islands in the eastern Atlantic which includes the Azores, and the Canary Islands which the birds were named for.) Of course, the canary has been domesticated and is a popular pet bird. The American Goldfinch is, as the name suggests, a type of finch. In fact, the American Goldfinch is more closely related to the Canary than it is the European Goldfinch, so mistaking them for canaries maybe isn’t the most absurd thing after all haha.

The American Goldfinch is a common and widespread bird, found throughout the continental U.S., southern Canada, and parts of Mexico. They are resident to short distance migrants, only moving a few hundred miles at most (while some populations don’t migrate at all.) The male Goldfinch is unmistakable, showing a bright yellow coloration throughout, with black wings, and a black “toupee,” though in winter, they loose the black on their heads and are a much more drab yellow, almost brownish (they retain their black wings.) Females are yellow as well, but aren’t as bright, and lack the “toupee.” They are about the size of a sparrow, and have similar habits. Their bill is thick and almost conical in shape, perfect for cracking seeds. In fact, the American Goldfinch eats almost nothing but seeds, which is why they are so common at bird feeders.

They can also be identified in flight fairly easily, as they commonly call while in flight, a series of short tweets in quick succession. Their song is one that, while distinct, always throws me off. I just can’t seem to commit it to memory. Every time I hear one, I wonder “what is that?” Then I see it’s a Goldfinch, and I’m like “Oh, yeah. I forgot what they sound like.” I will say, however, that I’m getting better at their call. They seem to be very common here in St. Louis, or I’m just noticing them more often!

As I said early in this post, when I was a kid I thought they were canaries, just because they were the only yellow birds I knew of (of course, there’s a ton of yellow birds found in the Americas. Looking at you, warblers.) Turns out, I’m not the only one. One day while working in Central Park, a visitor came to me asking if I knew birds (my binoculars probably gave me away.) I said yes, and she wanted to report an escaped canary in the park. Now, while I told her it was entirely possible that someone’s pet Canary got loose (I’d come across escaped parakeets before), I told her that it was more likely that it was simply a goldfinch. She insisted she knew it was a canary because her daughter was a veterinarian. No really, that’s what she told me. I reiterated that while it was possible, it was much more likely to be a goldfinch, or even any one of a dozen kinds of warbler. She basically told me I was stupid and didn’t what I was talking about. I told her to have a nice day. Now mind you, she was the one who stopped and asked me. Guess she just wanted someone to validate what she thought, even if it was wrong. That’s New York for you.

Join me next time when we head back into the world of sparrows. See you then!